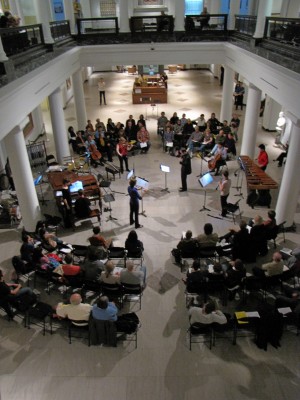 Refracting the Fourth Wall: A Study in Changing Perspectives

"While many collaborations between the visual and performing arts draw specific connections between the content of these similar art forms, this program begins first with the question: "what constitutes the experience of engaging with Mark Di Suvero sculpture?" This concert deconstructs the elements from which an observer might derive meaning - proximity, color, shadow, hue, line, scale, style, shape, etc. - and transfers them to a temporal musical experience. Rather than having the liberty to move freely around the static work of visual art, this performance morphs the audience into the fixed object, allowing the musical art to swirl, float, drive, envelop, and surround them.

Since this concert is as much a seamless, immersive experience as a staged performance, listeners are welcome to move to different seats, and engage with the music from a variety of perspectives. Ultimately, our aim is to be continually conscientious about both how the music is affecting the listener, and how the listener's physical relationship to the sound enables or adjusts their experience."

King of the Sun - IV. The Flames of the Sun Make the Desert Flower Hysterical: Fiery (1988) by Stephen Hartke

“African Art and the Shape of Time explores how African art gives material form to diverse concepts of temporality, history, and memory. African art is often interpreted in Western analytical frameworks as expressions of timeless myths and rituals, interrupted only by the colonial encounter. African Art and the Shape of Time complicates such conventional views by considering diverse modes for reckoning time and its philosophical, social, and religious significance.”

"Regardless of how culture, history, or memory is represented globally, one universality of the human experience is the temporal one: We all exist in a linear universe.

Experiencing Timelessness, aims to provide access to the "now," separated from expectations about the future and focusing on the experience of the present moment. Where other programs might utilize music of those who have philosophized on and composed through this lens – John Cage, Philip Glass, La Monte Young, among many others – this performance seeks to argue that adjusting the presentation ritual of diverse musical voices can facilitate a mindful listening experience.

In timelessness, one becomes aware of ancient and recently composed music alike. One’s ears are filled with sounds of popular culture, folk tunes, philosophical musings, and implacably groovy rhythm. One swirls about, observing meticulous craft with cyclonic motion; imperceptible beauty with art. Perhaps dreams and reality start to collide, confusing our otherwise clear perception of an elusive memory. Ultimately, this program hopes to leave you longing for, reacting against, or enjoying the vacation from our incontrovertibly forward-moving linear universe."

The Idea is the Machine Which Makes the Art

Mirabai Songs for mixed ensemble and soprano (1982) by John Harbison

“The Idea is the Machine Which Makes the Art” – Sol Lewitt

In an attempt to link, though not equate, aspects of feminist thought with extramusical tissue, this program compliments very well themes expressed through Ms. Perret's process. Whether the inspiration for art is a synthesized fictional narrative, as with Ms. Perret, or ancient poetical texts from an Indian mystic, or international myths set to song from the 1960s and 1970s, themes of love, identity, and evolving beyond oneself permeate throughout.

Today, now that the process in creating these works has finished, we concern ourselves with the visceral listening experience of the audience, with hope that exposure to these affecting pieces will individually illuminate transcendent beauty within."

Other programs available upon request, including: