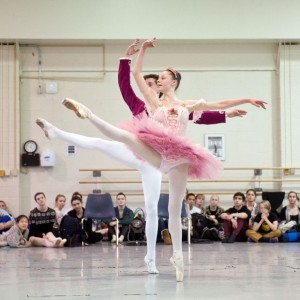 UNC School of the Arts brought its significant dish to the community’s seasonal feast of the arts Friday night with its 49 th annual production of Tchaikovsky’s “The Nutcracker” at the Stevens Center. It will run through Dec. 21.

Produced by three departments — the Schools of Dance, Design and Production, and Music — the UNCSA’s holiday offering is a much-anticipated event, as evidenced by the standing-room-only house.

The lively staging, created by former dance dean Ethan Stiefel in 2009, is holding up well. This year, Jared Redick, an assistant dance dean, took the artistic director reins, bringing in guest principals from Boston Ballet, a company that he performed with for many years.

UNCSA consistently brings in dazzling guest performers, and, fortunately, this year was no exception.

Whitney Jensen is an exquisitely proportioned lyrical dancer with extravagantly long legs and endless extension. Add to that a long torso and an airy topline, and she is able to inhabit earth and sky simultaneously.

Jensen held her center masterfully in all her turns, and her tours chaînés déboulés at the end of the Sugar Plum Fairy solo were like silk.

Jensen was robustly partnered by Yury Yanowsky. His leaps were high, his landings sure, if slightly stolid, and he has great swagger to him. His Cavalier was anything but, and, in best partner style, he was always looking out for Jensen’s interest, even going so far as to hold her up with his arms alone when the pair slightly missed a lift that was intended to end on his shoulder.

A strong dancer is a wonderful thing.

Ahna Lipchik and her Cavalier, Saki Morimoto, performed well in the “Snow Pas,” one of the show’s technically challenging duets.
The ensemble dancing was charming. It’s all there: the Arabian dance, the Russian dance, the Spanish dance. Even the opening scene, a procession to the party, which in lesser productions seems like just a place holder to get you to the real stuff, was entertaining. Steifel has given the party-goers interesting business, so everyone appears to be engaged and having a good time, just a party-goers should.

Veteran dancer Chris Martin creates a particularly dashing Uncle Drosselmeyer, the mysterious relative who catalyzes “The Nutcracker’s” narrative, introducing toys and games at the party, and acting as a kind of guide through the Lands of Ice and Snow, and Sweets.

Sarah Yang was buoyant in the ingénue roll of Clara. She has great feet already. Seth Acenas, in the role of Sasha, Drosselmeyer’s nephew, caught some great air on his leaps, and was a good partner for Yang.

Also new this year, Maestro Christopher James Lees, music director, fielded a well-rehearsed orchestra that sounded clear and confident from the first notes of the overture. Lees did a fine job conducting his first full-length ballet and his first time out with the UNCSA dance department. A stellar collaboration is born.

The lighting by Brad Fields makes magic. And costumes, by Kathryn E. Grillo, are consistently gorgeous and appropriate.
The school layers on new elements of costuming and technical design every year, and the production just gets richer and deeper. Although this year’s opening night was not as seamless as some have been, it was still awe-inspiring.
And I just have to say: The mice totally rock.