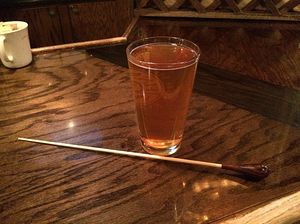 What beer goes with Bach? How you can hear the symphony at a Charlotte brewery this month

Beer may be the beverage of choice for football, basketball and baseball, outdoor festivals, backyard cookouts and rock concerts. But a pint is versatile enough to go with, well, everything.

To prove it, Charlotte Symphony Orchestra and NoDa Brewing Company have partnered to create On Tap, a series of three performances at the brewery’s North Tryon Street location.

Assistant Conductor Christopher James Lees, who’s new to CSO, will lead all three performances at the brewery, which is already home to the Chickspeare troupe. The first performance is 6:30 p.m. Tuesday, Nov. 29. The other two events are Jan. 31 and April 25 of next year. Each will have its own sound and flavor. Literally. There’s a different repertoire and a different brew for each event.

“We chose a helles bock because it is a paler, more hoppy version of a bock – a strong lager,” said Suzie Ford, who co-owns NoDa Brewing with her husband, Todd. “A helles bock is pretty traditional, and since Bach is also very traditional, we decided to keep it true to style instead of adding our own twist.”

That’s kind of where traditional ends, though

At the first event, a 15-piece string ensemble will play selections from Bach (who, like a bock, hails from Germany) and Jimi Hendrix. Lees doesn’t see anything strange about the pairing: “People may be surprised to hear how similar the cool licks from 1970’s Jimi Hendrix are to Bach from the 1700s.”

“The boundaries that keep musical genres from cavorting with each other are becoming blurry,” he continued. “We live in an iPod culture where many of us enjoy a smattering” of classical, rock, country, jazz, pop and more.

By way of example, he said his own Spotify station includes Billy Joel, The Beatles, Pink Floyd, Snarky Puppy, Chris Thile, the Punch Brothers and, of course, classical music. So, it’s natural for him – and CSO – to create a seemingly crazy live mixtape of a performance with wildly different genres of music.

“The primary goal of the series is to uphold part of our mission, which is to get the orchestra out of uptown to … serve our whole community,” said Virginia Brown, CSO’s director of communications. They’re keeping it affordable, too: Admission is just $10 and includes a beer.

Lees talked about his desire to make the Symphony accessible to everyone. “We’re living in a post-classical age,” he said. “Music of any variety should be accessible to anyone, anywhere. Symphonies don’t need to be limited to playing concert halls. We want to go where people hang out.”

At the November NoDa Brewing event, the ensemble will play Bach’s “Capriccio from Partita No. 2 in C Minor” (arranged by Eric Nathan) and Brandenburg Concerto No. 3, as well as a string quartet version of Jimi Hendrix’s “Purple Haze,” Copland’s Hoedown from “Rodeo” and the Eurythmics’ “Sweet Dreams are Made of This” — with a little Gloria Estefan and Mozart thrown in for good measure.

Lees, whom Brown calls “the guru” of this new brewery concert series, conducts CSO’s family-centric Lollipops series, plus education and community performances. He’s only the second American Gustavo Dudamel Conducting Fellow with the Los Angeles Philharmonic. He knows how to hustle, too. Lees does double duty at CSO and as music director of the UNC School of the Arts Symphony Orchestra.

And Lees is a beer aficionado. He was partial to Oktoberfest brews last month, but he said Neighborhood Bach Party will likely be his favorite ale this month.

He also loves breaking down barriers. If anyone thinks there’s a dividing line between a cold beer and classical music, Lees looks forward to blurring that line at On Tap.

The first On Tap is 6:30 p.m. Tuesday, Nov. 29. General admission tickets are just $10 (a steal for a CSO concert!) and include one beer and a pint glass koozie. Tickets will be available at the door. NoDa Brewing Company: 2921 N. Tryon St., Charlotte.