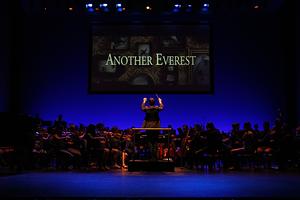 If Christopher James Lees has his way, you’ll find yourself inside a kaleidoscope of sounds and sights at UNC School of the Arts “Collage Concert” on Saturday.

Lees, music director of the UNCSA Symphony Orchestra, is aiming to craft a concert to showcase nearly every discipline in the School of Music and include collaborations with the schools of dance, drama and film. It’s this year’s “all-school musical” by way of the music department.

“Imagine yourself inside a kaleidoscope, surrounded on all sides by vivid, colorful shards in dynamic configurations of shape through transparent windows of light,” he said. “These shards, laid beside each other, illuminate a unique view of the whole picture, made possible only through their placement beside the other.”

Musical selections will range from the full UNCSA Symphony Orchestra, Jazz Ensemble and Cantata Singers to instrumental solos, duets and ensembles, with performers on stage, in the audience and in the balcony of the Stevens Center.

“It has been such a full and intense year,” Lees said of his second year heading the orchestra. “This is the last school-wide performance event in the last weeks of the school year and our last opportunity to show how collaborative performances can happen. This concert shows our camaraderie and puts a unifying cap on the year.

“We talk a lot about collaboration, but the fact that we can actually do it is really great. ... It’s nice to be able to include alums in the process when the rest of the campus is so busy.”

One of those alums is Maria Wurttele, a sound designer who graduated from the School of Design and Production in 2015.
Wurttele moved back to Winston-Salem in August after a year in New York where she expanded her resume with jobs like interning on a little show called “Hamilton,” which just won a Pulitzer Prize.

“Being in the room with those creative minds and those Broadway professionals was just incredible,” she said.
Unlike Lees, who hopes the audience will notice everything, Wurttele said that she feels like a success if no one notices the sound design.

“I’ve been brought up with the school of thinking that if you notice the sound, then sound has done its job wrong,” she said. “It’s interesting working in a field where nobody notices you until you screw up.

“I take the best compliment as no compliment. If people say nothing about the sound, it’s the best feeling.”
Reared in Miami, Wurttele found two paths that led her into sound design: She went to a lot of rock ’n’ roll concerts, and she hung out with the theater kids in high school.

“I got interested in the theater world,” she said. “I knew I had no talent in music or acting, but a lot of my friends were in theater, and they encouraged me to get involved backstage. They needed somebody to do sound. I didn’t know anything, but they threw me into the deep end and let me figure it out — and I ended up really really liking it.”

And the rock ‘n’ roll route?

“I went to a lot concerts. The band would be up on stage, but the sound guy in the back always looked really cool,” she said. “He got to hang out with the band and look like he was the boss of the place.”

Wurttele said that her interests have changed since high school.

“I definitely have changed a little bit, creatively. I really enjoy making content, and in rock ‘n’ roll you don’t get to do that as much,” she said. “I really like working with music, but I’m at the point in my life where I’m in too deep in the theater world to swim back out. And I really like it.”

The concert will begin and end with performances by the Symphony Orchestra. “We’ll begin with a selection from the magical ‘Scheherazade’ by Nikolai Rimsky-Korsakov, and will end with an excerpt from Camille Saint-Saens’ Symphony No. 3,” Lees said.

And in between, there will be jazz, choral, percussion, saxophone, flute, oboe, piano, violin, trumpet and collaborations with other schools.

“One of the things that makes UNCSA unique among arts conservatories is the range of disciplines that we teach: music, dance, drama, filmmaking, theatrical design and technical production,” said Karen Beres, interim dean of the School of Music. “In the School of Music, we are always interested in giving students opportunities to collaborate across disciplines.”

Collaborations range from an excerpt from “April,” a contemporary dance piece choreographed by Brenda Daniels, School of Dance associate dean, to “Wildflowers,” an original composition by Kenneth Frazelle, School of Music faculty member.

“Another Everest,” directed and animated by film student Aleksandre Koskinski, will be screened, accompanied by the original score written by student composer Dak van Vranken.

School of Drama students will perform “Saki Samurai,” a demonstration of theatrical fight choreography by Dale Girard, the director of drama’s stage-combat program, and “Too Late to Turn Back Now” from the Broadway musical “Bonnie & Clyde,” performed by student vocalists with Drama faculty member Greg Walter on piano.

Other highlights will include:

“My Spirit Sang All Day” (Gerald Finzi) and “Hymn to the Eternal Flame” (Stephen Paulus) performed by the Cantata Singers with Nate Zullinger, conductor;

“Triste” (Antonio Carlos Jobim) performed by the Jazz Ensemble, directed by Ronald Rudkin, and the strings of the Symphony Orchestra, conducted by Lees;

“Cheers” (Henry Mancini) performed by the Jazz Ensemble under the direction of Rudkin;

An excerpt from Eugène Ysaÿe’s Sonata No. 2 in A minor: “Les Furies,” performed by violinist Lucia Kobza, a winner of the 2014 UNCSA Concerto Competition and the North Carolina Music Academy Competition; and

John Horsman, a Design and Production alumnus, is production and stage manager for the concert.

“The way that we hear a piece is directly affected by what came before and after it,” Lees said. “An old piece can sound new, and a new piece can sound old, if the piece after it sounds newer. It changes the lens through which you hear the music, and it’s lining all those pieces up that puts you inside the music.

“That makes it more of a journey than a showcase.”